SSLv3 was created, and, together with the newer TLSv1/1.1/1.2, it is still currently being used to secure the transport layer of the Internet. As it happened for SSLv2, recently Google engineers pointed out that SSLv3 is broken (with an exploitation technique known as POODLE) and should not be used any longer.

If you want to install apache2 with SSL support check here once you have everything ready you need to configure your SSL for good security.

SSL is the most known and the most popular, it is not the only protocol that has been used for the purpose of securing web transactions. It is important to know that since invention of SSL v1.0 (which has never been released, by the way) there have been at least five protocols that have played a more-or-less important role in securing access to World Wide Web, as we see below:

Released by Netscape Communications in 1994. The main goal of this protocol was to provide security for transactions over the World Wide Web. Unfortunately, very quickly a number of security weaknesses were found in this initial version of the SSL protocol, thus making it less reliable for commercial use:

possibility of forcing parties to use weaker encryption 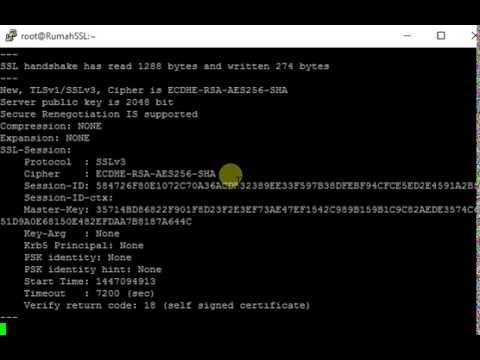 no protection for handshakes

Released in 1996 by Netscape Communications. SSL v3.0 solved most of the SSL v2.0 problems, and incorporated many of the features of PCT. Pretty quickly become the most popular protocol for securing communication over WWW.

Published by IETF in 1999 (RFC 2246). This protocol is based on SSL v3.0 and PCT and harmonizes both Netscape’s and Microsoft’s approaches. It is important to note that although TLS is based on SSL, it is not a 100% backward compatible with its predecessor. IETF did some security improvements, such as using HMAC instead of MAC, using a different calculation of the master secret and key material, adding additional alert codes, no support for Fortezza cipher suites, and so on. The end result of these improvements is that these protocols don’t fully interoperate. Fortunately enough, TLS has also got a mode to fall back to SSL v3.0.

If you want to enable SSL Version 3 and TLS v1.0 for more security you need to add the following lines under SSL section in your apache hosts configuration file

You need to replace localhost to your website hostname