Originally published on July 5, 2017, The Big Sick is now available for streaming for Amazon Prime users.

Stream The Big Sick OSP - Amazon Prime Gets the Scream of RomComs - Ep 32 by Mike, Mike, and Oscar from desktop or your mobile device. Academy Award nominee, heart-warming, hit comedy from producer Judd Apatow (Bridesmaids, Trainwreck). The Big Sick is based on the real-life courtship between Pakistan-born comedian Kumail Nanjiani (Nanjiani) and grad student Emily Gordon (Zoe Kazan) who fall in love but struggle while dealing with Emily's mysterious illness and their families’ culture clash. 'The Big Sick' arrives on Amazon Prime. According to Metacritic.com, 'The Big Sick' is ranked no. 22 out of all movies released in 2017 with a Metascore of 86 out of 100. That's pretty darn good.

Some Background: Before getting into the movie as a whole, it’s important to talk about how Kumail and Emily got to where they are today. Back in the early days of podcasting, I met the couple through The Indoor Kids, a podcast where the couple and a guest played and talked about video games and the culture that surrounds them. When I watched The X-Files for the first time last year, it was Kumail Nanjiani who was my point of discussion through his X-Files Files podcast, and yes, I even read and put into practice skills from Emily’s (excellent) self-help book, Super You. Finally, I was an avid fan of their Meltdown show, a kitschy LA comedy show in a comic book store showcasing the best talent there is before it closed its doors in October 2016.

It’s safe to say I—and anyone else who was a fan of the two—heard the story featured in The Big Sick more than once. So thanks to the phenomenon of the internet friendship mirage, it feels like watching two old friends get to make a movie. Seeing it makes you feel a strange mixture of pride and hope, like remembering when you used to hang out on the couch and talk about video games, and now they’ve written a movie, you’re seeing them on the big screen, and Ray Romano is playing Emily’s dad.

This is a multifaceted story and one of the biggest facets is the cultural issues that Emily (played by Zoe Kazan) and Kumail faced. The movie opens on Kumail expressing that growing up in Pakistan was not much different than America, besides being slow to receive new episodes of television and that little road bump: arranged marriage. As Kumail and Emily begin to date (despite her initial reluctance) Kumail is suffering through dinner appointments set up by his mother (Zenobia Shroff) to meet other eligible Pakistani women. At this point Kumail is unable to communicate that not only does he not want an arranged marriage, he’s also in love with a white woman. This news is devastating enough that it may warrant the loss of his family and makes it understandable why he keeps so many secrets.

Comedy: Kumail is one of my favourite working comedians today and most of that has to do with his impeccable timing and delivery that carries over so well in The Big Sick. Nobody can play us better than we can play ourselves, and where some people cannot match the energy required for film Kumail reaches beyond. He has presence, as already evident in his role as Dinesh on Silicon Valley. His strength lies in his jokes and The Big Sick treats us to them not only on stage through his stand up comedy but also through his interactions with everyone around him. The movie is genuinely hilarious because Kumail deals with life and tragedy through comedy, and it’s not a bad way to live.

One of The Big Sick’s greatest gifts is how it portrays comedians in general. While treated as a secondary plot point, while Kumail is falling in love with Emily and dealing with her illness, he’s also on the line for a spot at the Montreal Comedy Festival and each set he does is a potential audition. After watching various repeated sets, we’re flies on the wall in the green room as comics rib each other mercilessly, try out bad jokes on one another and work through their material. These were the most realistic scenes that encompass the lifestyle of a comedian in the early stages of their career. Kumail sleeps on an inflatable mattress in his shared apartment with Chris (Kurt Braunohler, one of many recognized comedians in the movie) and works as an Uber driver on the side. He, along with Mary and CJ (Aidy Bryant and Bo Burnham) are just trying to make it work despite their parents’ wishes and their personal situations.

Love: Let’s get to love, though. Anyone who’s felt it knows it isn’t easy, and Kumail and Emily’s is no exception, but it is so good. Their initial meeting feels by chance, but their fate definitely doesn’t. Despite Emily’s soft reluctance to pursue a relationship while she’s in grad school, she just can’t help herself around Kumail. Their relationship goes from making out with horror movies in the background to an endearingly silly love that’s grinded to a halt by misunderstanding. Shortly after, Emily is put into a medically-induced coma as her body fights an infection. Though on the edge of her life at this point, Kumail is pulled into the vortex and is fully challenged about his fears and reservations as she lies fighting an unknown assailant. He steps up like a man and does more than what is required of him. Though she spends the majority of the movie unconscious, when she’s awake, Zoe Kazan is a strong choice for Emily, encompassing the awkward and dorky parts of her along with her intelligence both to great effect.

Familial love is strong in The Big Sick, too. Holly Hunter gives the kind of peak performance that makes you wish she was your mom, bird-like in her motherly anxiety and protectiveness. Her face speaks volumes listening to the doctors cryptically explain Emily’s condition and her personality shines through when she says, “No they don’t, they’re just winging it like everybody else,” when reassured the doctors know what they’re doing. Playing opposite Ray Romano (let’s talk about great timing again) makes them feel like a weirdly ideal couple despite their very glaring differences. Their banter, with Kumail between them, is one of the best parts of the movie. Where Emily and Kumail’s relationship could have appeared sick and one-sided, their presence in the story helps it feel more rounded and illustrates the complexity of the journey.

While Kumail’s family struggles with his decision to love a white woman, seemingly going against everything they have sacrificed for him, Emily’s family struggles with their own issues. Kumail’s feel more grave when he comes clean and is kicked out of his family. His moment of finally standing up to his parents is equally inspiring and heartbreaking, rivaled only by his interactions with Emily when she finally awakens. He says what all 20/30-somethings eventually say. “The rules don’t make sense to me.” “I don’t know what I believe.” Kumail is under a mountain of stress: he’s trying to make it in comedy, his girlfriend is seriously ill, his family has disowned him, as if going through life carrying the tremendous weight of love is not enough.

Kumail’s mother, Sharmeen, is played with remarkable heart by Zenobia Shroff. It’s obvious that as angry as she is at her son, she is also brokenhearted by his choices and her duty to disown him. Kumail’s father, Azmat (Anupam Kher) is a bit of a stereotypical goofy dad but remains the softer of the two even when the going gets tough.

At the risk of going on too long (which, coincidentally, is maybe the only flaw of The Big Sick), I appreciated the scenes involving Kumail’s potential wives and the agency they are given. In particular, the last woman who Kumail meets with gives it to him straight when he tells her she deserves someone better than him. “People are always telling me what I deserve,” she spits, “It’s bullshit.” Yeah, it is. And you can feel the pain she must be in without the luxury of already being in love and standing up to her own family.

Though it seems every odd is against them, Kumail and Emily come through in the end as an inspiring and beautiful couple. These aren’t spoilers—they wrote the movie together. It was refreshing to see such an honest, real relationship portrayed onscreen that ambitiously tackled so many topics. Not only that, it’s inspiring to see how far they have come together as an example of what you can achieve if you have just one good person who has your back. Though it stabs every emotion in your heart, it never feels cheap. Still, you’ll probably want to get some ice cream after this one. 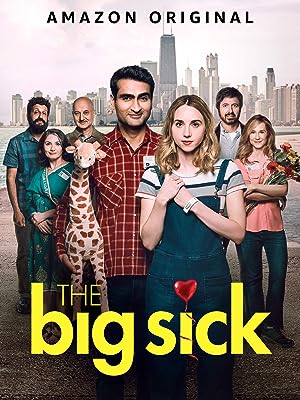 Overall: The Big Sick is well-written, damn funny, and it has more heart than should be allowed. It will probably make you cry, but you’ll be laughing again before your cheeks are dry, and it has the chops to become a favourite romcom even for those who are not already enamoured by the genre.

Is The Big Sick Free On Amazon Prime